Do you have a high copper to zinc ratio? 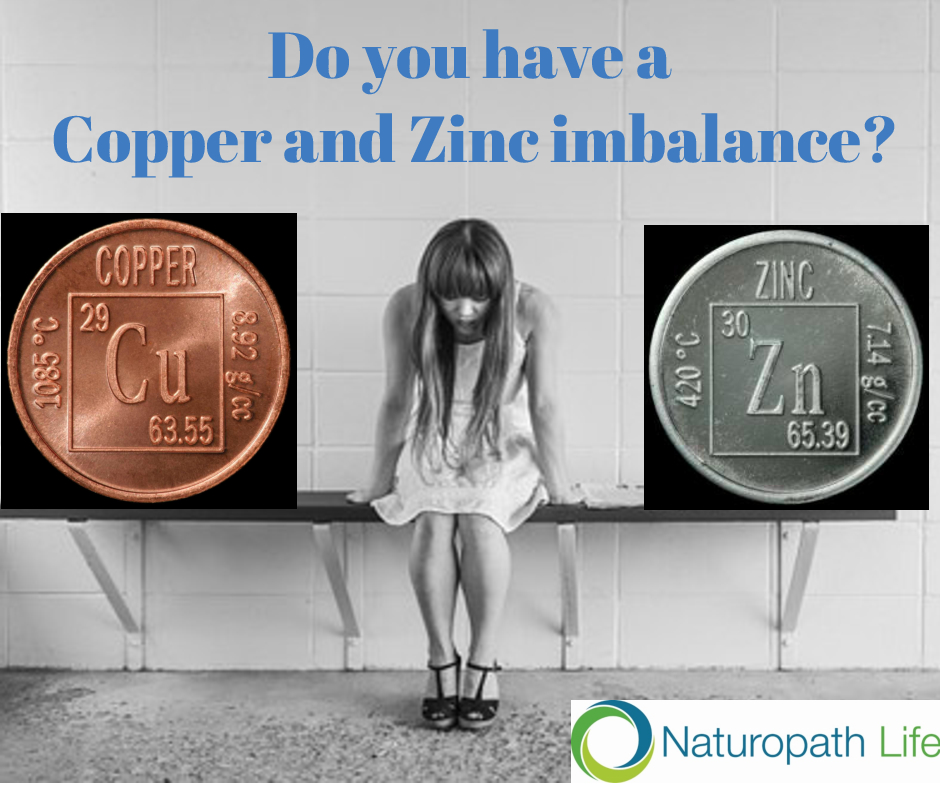 Is your Anxiety or PMS caused by high Copper to zinc ratio?

Copper and zinc are two important minerals in our body and required for a multitude of functions and processes. Zinc (Zn) deficiency and copper (Cu) excess are common clinical scenarios in both Australia and worldwide causing a high copper to zinc ratio.

A high Copper to Zinc ratio (Cu/Zn) can cause a range of detrimental health effects including growth and mental abnormalities, increased age degeneration, contribute toward cancer progression and increase oxidative stress and cardiovascular disease risks.

Both copper (Cu) and zinc (Zn) are antagonistic to each other, meaning the more of one element you retain the less of the other you will have in your body. The ratio between copper and zinc is a fine balance and one that is commonly being tipped toward copper in modern society to the detriment of our health.

Excess copper is far more common that Cu deficiency in Australia. Highly farmed lands are often high in Cu and low in Zn, water pipes, drinking water, pesticide residue and Cu added to animal feedlots are all forms of exposure that over time artificially increase our levels of this mineral.

On the other hand, Zn is estimated to be deficient in over 50% of the population despite it being supposedly available in many foods. Again, poor farming methods and low quality food, nutrient imbalances with high Cu, low stomach acid reducing the adsorption of Zn and metabolic processes that use up our Zn stores leaving us low are all common reasons many of us are Zn deficient.

Excess Copper is associated with a range of mental and behavioural disorders, it can contribute to the symptoms of depression, panic attacks, anxiety, fearfulness, excessive anger and schizophrenia.

A low zinc level is involved with sleep disturbances, depression and other mood disorders. Zinc is required in both the production of melatonin and serotonin. Without adequate zinc we cannot create sufficient levels of these to allow for restful sleep and a well-balanced stable mood. A low level of zinc is also associated with various skin conditions, sickle cell anaemia, diabetes and anorexia.

In relation to PMS, as the copper levels rise within the body so does estrogen. Low levels of Zn cause imbalances with progesterone, testosterone and further compound the increase in estrogen that Cu causes.

Pyrrole disorder is a common condition that highlights many of the mood related symptoms outlined above. Pyrrole disorder causes a deficiency of both Zn and B6, another vitamin crucial in neurotransmitter support. Pyrrole disorder sufferers almost always have excess Cu and require ongoing Zn and B6 supplementation. It is estimated at least 10% of children have pyrrole disorder and as high as 30-40% of the population that suffers from mental disorders.

A number of studies have been performed on kids with elevated Cu levels and their mood, attention and learning ability. One study focused on a group of 49 young children with an average age of 10.

The study also found that those children with the most violent and disruptive behavioural patterns had the highest Cu/Zn ratios in the group. (1)

Furthermore, four separate outcome studies were conducted where nutrient therapy was administered to children with behavioural disorders. Biochemical nutrient therapy focuses on restoring nutritional balance with vitamins, minerals and amino acids such as zinc, vitamin B6, magnesium, methionine and vitamins C and E.

In addition, a high Cu/Zn ratio was found to be linked to heavy metal accumulation and found to be a possible biomarker in those with autism spectrum disorder. When zinc levels are depressed, opportunistic heavy metals accumulate in the brain and body causing a wide range of adverse symptoms. (3)

The study concluded that there is a strict relationship between copper and zinc and the systemic oxidation and ageing of the body. Furthermore, it was suggested that a high Cu/Zn ratio be a useful predictive biomarker for poor health in the elderly. (4)

Another study also measured the plasma Cu/Zn ratio and measured various inflammatory markers of 498 people aged between 20 and 60. Subjects with cardiovascular disease all had higher plasma Cu/Zn ratios than those without, mainly due to increased plasma Cu.

In other subjects, most of the age related health decline appeared to be from a progressive decline in plasma Zn levels. The study highlights the importance of the levels of zinc in the body and the detrimental health effects when the Cu/Zn ratio is high. (5)

The role of both zinc and copper are of the utmost importance. Zinc is essential for healthy immune function, the reproductive system, normal growth and development and a range of other functions. It is also a major mineral for hormone production and is a copper antagonist.

Copper is required for a healthy nervous system, bones, joints, skin, blood vessels, mood regulation and myelin sheath formation. When levels become too high, particularly when zinc is low, toxic effects on the body can be observed.

Zinc is commonly low when copper is high as copper has a strong antagonistic effect on zinc. This imbalance appears to play a contributing role in many mental diseases including schizophrenia, anxiety, depression, ADD, as well as many other degenerative diseases related to oxidative stress including advanced ageing and cardiovascular disease.

Cancer formation can be found within studied patients that had high Cu/Zn ratios, again suggesting the oxidative and biochemical disruption high Cu/Zn has on the body.

If some of the above symptoms resonate with you of your family members, it would be wise to have your Cu and Zn levels tested. Common blood test result ranges that are considered ok are not sufficient to go by, the amount of Cu in relation to zinc and ceruloplasmin is required to be calculated. Ceruloplasmin, a copper transport protein, should also be tested at the same time that Cu and Zn blood levels are taken to able to calculate the amount of unbound copper in the system.

We also commonly use a hair mineral analysis or other spectrometry scan to assist in giving a full mineral profile and a longer term picture as mineral levels are transient in the blood. It would be wise to work with a functional practitioner who understands this imbalance, knows the particulars of pyrrole disorder, excess copper syndrome, the consequences of copper dumping and can correctly interpret your blood and hair results.

We offer free complimentary 10 minute phone consult to all new clients that would like to discuss their health goals or concerns and we are well versed in treating the effects of high copper.

My full critical analysis paper on the effects of a high Cu/Zn ratio that was published and presented at the Western Australian Symposium of Neuroscience, held by Curtin University in June 2017 can be found here on the Naturopath Life website.

2 Replies to “Do you have a high copper to zinc ratio?”